Our research is broadly classified into three categories: animal communication, behavioral drive, and axes of divergence. 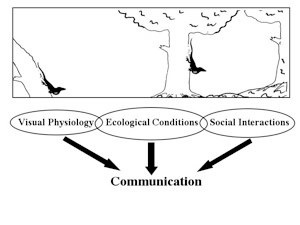 One of the most striking features of Anolis lizards is the diversity of their displays, including head-bobs and dewlap displays (i.e., coloration and pattern), which are often given as part of courtship displays. Such a rich repertoire of visual signals provides fertile ground for addressing questions in communication. One hypothesis is that the existence of these visual signals has promoted speciation and may play a role in the extensive radiation of the group. Currently, we are addressing several questions, including: A) What mechanism(s) shape(s) the evolution of visual displays (i.e., dewlap color and bob patterns)?  B) Is divergence in species recognition an effective barrier to gene-flow?  C) How plastic are head-bob displays? 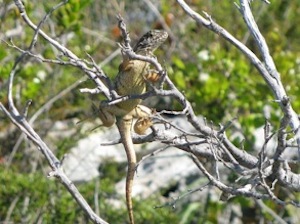 Behavior is often viewed as an important driver of evolutionary change. The idea is that changes in behavior can allow animals to exploit new habitats, and that those changes can favor changes in morphological, physiological and/or behavioral traits. As part of a long-term study looking at the effect of predation pressure on behavioral traits, we are investigating if changes in behavior (e.g., habitat selection, activity pattern, and social displays) can drive changes in morphological traits and thus ability of the lizards to exploit different habitats. 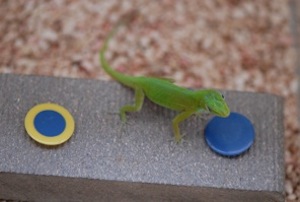 Another component of behavioral drive addresses the ability of species to deal with novel environments and how this ability can be limited by the cognitive ability of the species. Under this scenario, interspecific differences in cognitive abilities can reflect differences in life history traits, neuroanatomy and behavioral plasticity. Anolis is an ideal subject for neuroecological study as it provides a unique opportunity to evaluate the possible interactions between life-history traits, ecological variables and cognition in closely-related species. Currently we are addressing several questions, including: A) Is there a correlation between habitat complexity and neuroanatomy? B) Are species living in more complex habitats better able to solve novel problems? 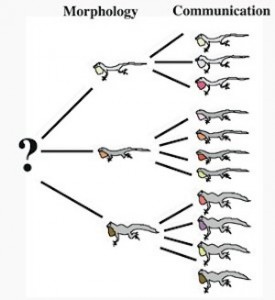 It is well documented that the adaptive radiation of anoles in the West Indies is the product of independent evolutionary events on each of the islands. Furthermore, each of the islands has a similar set of “ecomorphs” — species that have similar morphology and behavior — which live in similar habitats. Interestingly, multiple species of the same ecomorph can be found on any given islands. This observation suggests that although divergence in morphology is an axis of the anole radiation, divergence along this axis is not sufficient to account for the species richness found in the genus. We are currently evaluating two other possible axes. First, we are evaluating the possibility that divergence in spectral properties of the dewlap is a by-product of selection for efficacy of communication under distinct ecological conditions (i.e., communication axis). Second, we are investigating the possibility that divergence in physiology, particularly thermal biology, is another axis of the anole radiation. We are conducting both population and species level studies to address these possibilities.